Some good progress has been made since my last post a month ago.

As I mentioned last time, the next job was to add the magnetos to the engine. I wasn’t utterly thrilled with the quality of them to be honest, so I’ve worked them up with a little bit of weathering to try and make them look more realistic and accentuate what detail there is. It has definitely helped.

In fact it has made me wonder if the rest of the engine might benefit from some very delicate weathering just to give it more ‘depth’, for want of a better word. I need to consider that a bit more as it would be very difficult to reverse if it didn’t work out.

Having installed the magnetos, the last of the HT wiring could be added. My PDF version of the Wright-Martin H3 Maintenance Manual was invaluable in allowing me to connect them up correctly.

The final result. Only the water pump has to be added at the rear now. 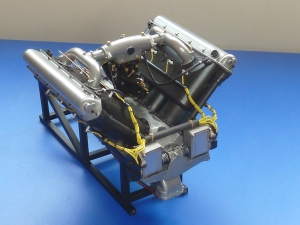 I had designed a water pump previously (and I think there are pics of it on here somewhere), but if you looked closely at it, it was impossible to manufacture. Luckily I came across some good pictures of a real Wright-Martin water pump disassembled on a bench, and I took the opportunity to redesign my CAD model to reflect the new information.

That pump has now been installed and the delivery pipes to the water jackets added. It took quite a while to find tube the right size with a close to scale wall thickness. In the end I used the outer insulation coating from some thinwire coaxial Ethernet cable. At first, bending the straight pipe to fit was putting too much strain on the model’s mounting points. They were in danger of being pulled off. The pipe needed to be a pre-formed shape to reduce this. A quick soak in boiling water soon made the tube pliant enough to be coaxed into the required shape and it has set like that as it cooled, much reducing the strain.

I’ve also finally got around to making the adjustment lever for the advance and retard mechanism beneath the port magneto. It was made from 1mm dia stainless rod, held in a pin vice while I shaped it with a file. Then cut off the rod when it was complete. The arm itself  is just brass sheet 0.4mm thick. The holes at either end were drilled first then the shape filed around them as I struggle to drill holes exactly centrally at this scale.

In fact the whole engine is beginning to look quite realistic…

To weather, or not to weather? That is the question…

I had made some etched nameplates for the engine and gearbox, but they didn’t really make the grade. I’m trying to get more detail out of the process I have than it is capable of. Instead I used the etch mask to make some decals and mounted the decal on the rear face of one of the old etched labels. The look is much sharper. You can actually read the small text now. The engine number I chose is the next one along from the one held in the Smithsonian Museum.

The plate installed on the crankcase nose.

I’ve also commenced building a second engine that will be painted a burgundy colour. One engine will be a freestanding model, the other will be fitted in the Miss Severnesque model. 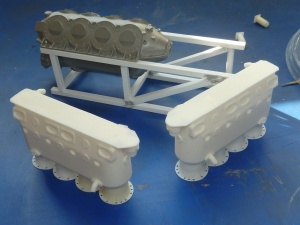 This time around I fitted the cylinders to the bottom of the water jackets, then installed the whole assembly on the crankcase. It still requires you to work very accurately, but is a shade easier than my previous method where I built the assemblies up on the crankcase.

A quick undercoat with a rather hideous matt red I bought for some forgotten purpose and never used. Probably because of the distinctly orange hue. 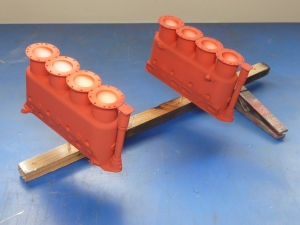 I started assembling the 2nd engine because I was waiting on the delivery of the 3D printed parts for Auto Engine Works, St. Paul Minn. “The Capitol” gearbox to arrive.

for the two gearboxes required.

Cold casting is good, but messy, and much more difficult than plain resin casting. The detail you can achieve is quite satisfying, though there is a trade-off between the amount of aluminium powder loading and the viscosity of the casting mixture. I find 67% (by weight) is the best for me. A liberal dusting of the mould with powder before pouring is also crucial.

Once airbrushed and the raised surface rubbed back with wet and dry paper, the result was striking. 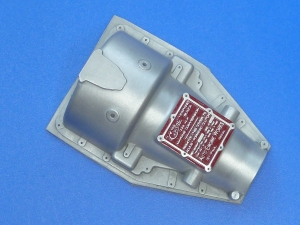 In fact, things were going so well it had to come to an end. And it did. When I dropped the gearbox casting in a careless moment… It was a good job I was alone, with only the cat to hear the ripe verbage that was uttered at this point in the build.

One of the big disadvantages of this cold casting technique is that the parts are much more brittle than standard resin, and people think that is brittle compared to polystyrene. Any thin sections like the flanges on the gearbox are very delicate until they are secured to something substantial.

Having taken the rest of the day off to calm down, the only thing to do was to build another as I couldn’t repair the damage to the old one without it being obvious (I did try).

One upside of this was that then next time I made the nameplate I eschewed the wet and dry paper technique to remove the paint from the raised lettering and did each letter individually with a scalpel. The result is noticeably sharper as you have more control. 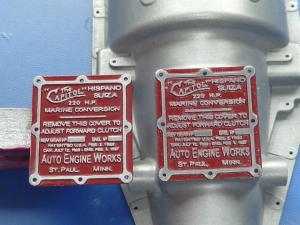 The scalpel technique was used for the black engine’s gearbox cover too. 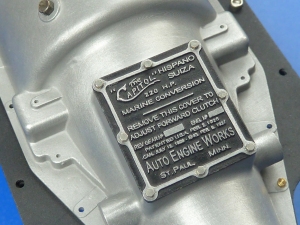 Here is it mocked up with the rest of the engine.

As you can see from the above picture, I have also finally got a round to casting the subframes used to carry the engine and gearbox assembly. These were quite tough to cast being very long and thin. ‘Very long’ meaning about 6 inches (150 mm) in my world of course. 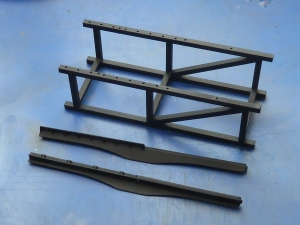 The subframes have been cast in ordinary resin and then airbrushed. Even so, despite having about 4 or 5 goes at casting them, I have yet to make any without bubbles in them somewhere. Filling them isn’t that tough though. I certainly wouldn’t like to attempt casting these parts using the cold casting mixture.

The frame which supports the subframes is only there for use while I’m making the models. I’ll come up with something a little better for the finished model, though it may not be radically different. It certainly won’t have risers that appear right under mounting bolts though.

I’ve also been working on the actual engine/gearbox mountings in the Miss Severn model. Here they are with some raw cast subframes held in place with pins while I work things out.

And with the space model of the engine resting on them.

That’s as far as I’ve got at the moment. The next steps will be to finish off the two engines to the point where I’m clear on which will be freestanding and which  will go in Miss Severn. The one that goes in the model will need the aft underside of the gearbox cutting away to fit, so I can’t permanently assemble and fit the gearboxes until that is decided.

Once that’s done, I’ll need to get onto some serious detailing work in the model’s engine bay as well as coming up with an exhaust system. I think the latter might be quite a challenge.

Here are a couple of pictures of the black engine as it stands at the moment. The gearbox is only mocked up in the photos and hasn’t been permanently installed yet for the reasons given above. 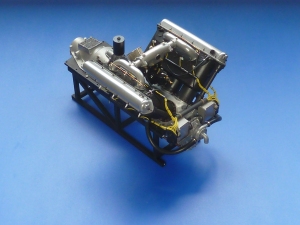