The undercarriage on the DR.1 followed the standard for the time with the exception that the fairing between the wheels had quite a pronounced aerofoil section and was a fourth winglet really.

The construction follows the same route as the main wings with a box section spar made up of four pieces of plywood with locating tabs, and the wing ribs glued on.

On the real aircraft the box section was actually an aluminium fabrication not wood. I experimented with making a new box section from scratch using 0.3 mm aluminium sheet, but couldn’t get the bends in it as sharp as I wanted with the equipment that I have, so in the end I decided to cover Hasegawa’s wooden spar with aluminium foil cut from the bottom of a ready meal container (M&S’s Gastropub Shepherd’s Pie since you ask. A better quality foil).

The ‘U’ sections were bent using my Etchmate, and as before, faux rivets were formed by pressing the blunt end of a drill into the rear of the foil to create dimples (before it was bent to shape). 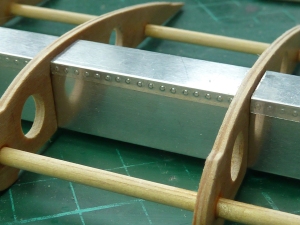 I addition to creating an aluminium spar I also modified the ribs slightly. They are missing some of the lightening holes, strengthening batons and the rear crosspiece is too far forward. In the picture below I have just started the modification process. The new locating hole for the crosspiece has been drilled further back and lower down in the ribs. I’m just about to enlarge the model’s original mounting point (middle hole) to represent a lightening hole and an additional one will be put just aft of the mounting hole for the leading edge crosspiece. 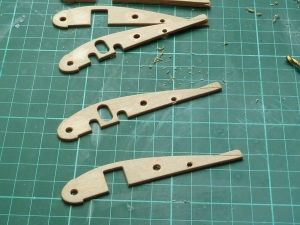 The finished result is shown below.

The mounting points for the struts and rubber bungee suspension are made up of white metal castings in the kit and mimic the real thing quite well. However they are attached to the spar using 2 mm bolts (again) which are vastly overscale and weren’t there on the real thing anyway.

Originally I intended to omit the bolts, fill the holes entirely and glue the castings onto the spar. To fill the holes I used some high tin content solder and then filed the profile flat again.

A word of warning on this technique. It is one of the more difficult and risky ones that I use and it is VERY easy to destroy the white metal casting. A little too much heat and big chunks melt away in an instant. If you aren’t experienced at it, please practise on something that doesn’t matter first to get your skills up to scratch.

After filling with solder. 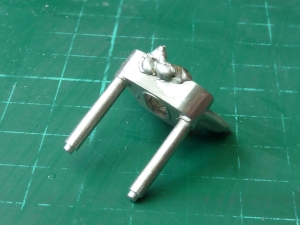 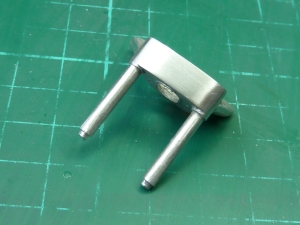 When I came to glue the castings to the spar I discovered that the bolts had a secondary function I’d overlooked. They go through the main axle and locate it horizontally. Without them the axle floats all over the place.

So I was forced to reinstate them, in a fashion. I replaced the bolts with 1.5 mm stainless steel rod which I glued in place and filed flat to the profile of the casting. It isn’t quite as neat as I’d originally planned, but is still much better than the kit’s solution.

You can see the result below. 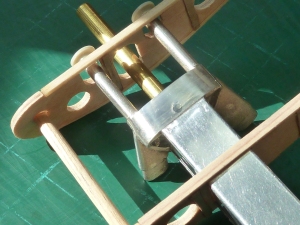 With the basic structure of the undercarriage complete the next job was the wheels. As with the Camel I wanted one wheel to be a skeleton and the other covered.

The kit wheels come with a lot of detail on them, but close examination of photographs of real aircraft indicated that none of it was present. It makes me wonder about my Camel model as much the same detail is there and I never really checked it if I’m honest.

I removed all of the detail and also smoothed  back much of the underlying spoke detail as that was also too pronounced. You can see the changes in the pictures below. 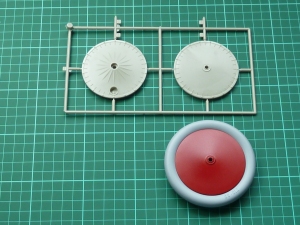 The tyres were sanded down to remove the casting line on the surface and then painted a light grey. In WWI the tyres didn’t have any carbon black in them and so were the colour of the natural latex which was a light grey/fawn apparently. This is another thing I may have missed on the Camel model.

Below is a picture of the tyres before and after removal of the casting line. 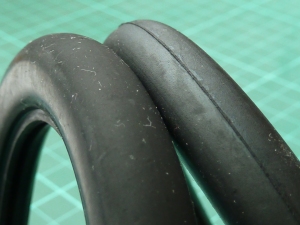 The construction of the spoked wheel followed the same principles as that used on the Camel. Laminations of plasticard (30 thou) strip were glued around a former to make the basic rim and two discs of plasticard glued on to form the edges of the rim. 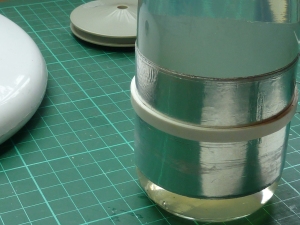 Having made the rim I then marked out and drilled the spoke holes from the outside. This was less than a success. In fact the holes were all over the place and looked a mess. I considered scrapping the rim and starting again. However, I’d already planned on gluing another profiled strip on the inside of the formed rim because the originals weren’t flat, but of a formed section. I took the opportunity to make this section and drill in a new set of spoke holes while it was flat on the bench. This is much easier to do accurately. Then I glued the profiled section to the inside of the rim and drilled through, from the inside out, to get a set of holes in the right place.

It looks neat enough from the inside, but you can see the mess made by the original holes. Thankfully it will all be hidden when the tyres are on.

This time I decided to make the hub out of brass sheet and tube for strength rather than use more plasticard as I did on the Camel. It’s a better solution and I’d use it in the future. I also marked the whole thing out by hand using a template drawn up in large-scale. The work is exacting but more accurate than I’d expected.

The finished hub is shown here on the spoke assembly jig with the finished rim.

The jig was required because the rim is central on the hub and so needs lifting up to the correct height for assembly. The actual assembly of the spokes was the usual frustrating job, but we got there in the end. Once they were all in place, and glued at the rim, they were soldered to the hubs and the outside face filed flat. 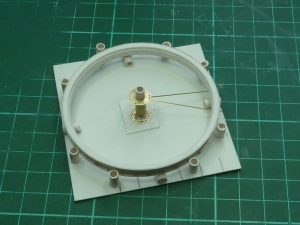 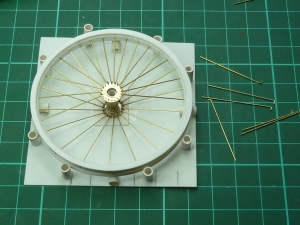 A coat of etch primer later…

I’ve made the wheels with the spokes emerging radially, whereas I’ve noticed that quite a few other modellers have them at an angle or even tangential to the hub. Both may be correct as it’s quite possible different wheels were used during the manufacturing run. However, my design is based on a photograph in  Paul Leaman’s book, Fokker Dr.1 Triplane: A World War One Legend, of what is reputed to be an original unrestored Dr.1 wheel. One slight modification I did make though, was to change the number of spokes from 40 to 36. It makes marking out an awful lot easier and I doubt many will notice…

Finally a topcoat of gloss black and a valve made from brass tube. 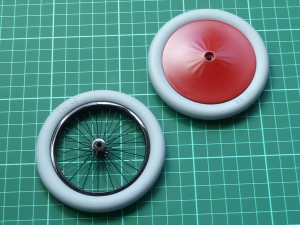 All that remains now is to cover and paint. 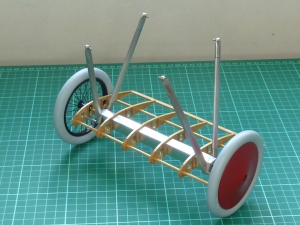