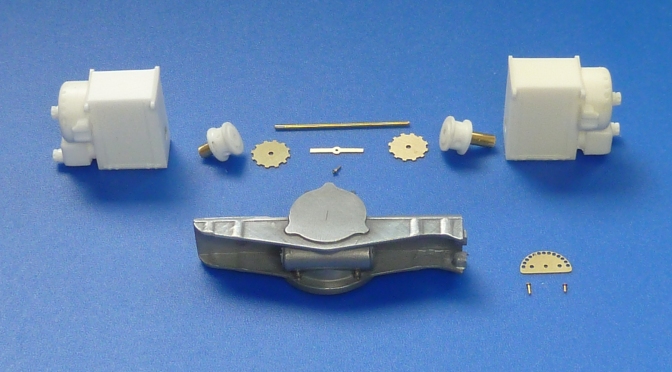 It’s been almost 2 months since the last update, and in all honesty, despite a lot of effort over that period, there isn’t that much tangible to show for it.

I attempted to produce the main components of the engine in pewter, but after a lot of iterations and variations I wasn’t able to produce something that was good enough for me. I think that it is just beyond the basic set-up that I have. No matter what I did, I couldn’t get the metal to flow into all of the detail of the moulds, so have reluctantly given the idea up as a bad job.

Instead I have been learning the ‘cold casting’ technique. This is really just resin casting with the mixture loaded with metal powder (aluminium in this case). Up to 80% metal by weight is possible apparently, but after a number of trials I’ve found that the maxiumum I could achieve, and preserve all the detail in the castings was 67%. That also makes the maths easier when working out amounts.

I think the results of cold casting are pretty good, and provided you thoroughly dust the mould with the metal powder before pouring, you can achieve a very realistic finish. It will even polish up to a degree. A mirror finish isn’t on though.

One big problem that I did come across, due mainly to inexperience with casting, was mould shrinkage. Using ordinary silicone, the moulds were fine the day after pouring them, but after a week or so they had shrunk slightly. About 1 or 2% by my estimation, but enough to ensure that there were unacceptable mismatches between the larger mating parts. The high temperature moulds I use for pewter casting use a slightly different silicone cure process and so don’t suffer so badly.

The outcome of the shrinkage problem was:

a) The generation of a lot of scrap parts.

b) The need to remake all of the moulds where dimensions were critical in ‘Additional’ or ‘platinum’ cure silicone. This has an advertised shrinkage of less than 0.1% which was good enough for my uses.

The other aspect that I had to learn about was hardness. The various rubbers come with a quoted hardness (usually using the Shore A scale),  but unless you’ve actually handled the stuff the bare figures don’t mean much.

Shore 65 is pretty stiff, which means the mould will support itself, but isn’t really flexible enough to release items with significant undercuts. 15 is very soft and spongy so undercuts aren’t a problem, however, stopping the mould from flexing all over the place is. 65 is also pretty gloopy and slow to pour, whereas 15 is thin to the point of oozing out through the gaps between the bricks in my ‘Lego’ bunds. Thick is hard to degas and pour, thin isn’t.

In the end I went for 25, which gives a fairly soft and flexible mould, but one that will retain its shape provided it is supported properly. for the latter I used the original ‘Lego’ bund into which the mould was made.

I have also invested in a vacuum chamber for degassing silicone mould material before casting, and a pressure pot for resin casting.

I find both of them essential to obtaining good bubble free castings. The vacuum chamber removes any entrapped bubbles in the mould material which, especially with the platinum cure, is quite thick and impossible to mix without getting some air in there. This results in bubbles actually attaching to your mould master during curing, and so being faithfully replicated in every cast item thereafter.

The pressure pot (actually a converted pressure paint pot for spray guns as it was significantly cheaper than dedicated items) ensures that any bubbles trapped in the casting resin when it is being poured are crushed to invisibility.

The compressor is an old one I had retired due to a seized motor which was uneconomical to repair, but which I actually managed to free up in the end. While it doesn’t really have the throughput required, it can take its time and pressurise its own isolated 8L tank to 120psi before hand. So once I have pre-charged that I can vent it into my 10L pressure pot after the resin has been poured and it gives me about 53psi overall, which is ideal. It also means my pressure pot reaches the necessary pressure in a couple of seconds, which is important when the resins you are using start to cure after about 2 or 3 minutes.

The experience gained from the now scrapped castings also lead me to get the cylinders reprinted in their component parts rather than as a preassembled item as I had before. Separating the cylinders means that I have some room to juggle things if parts still don’t quite line up. Well that’s the plan…

Having overcome all of the casting problems and climbed a very steep learning curve in the process I have been busy making castings for 3 engines (2 models plus a spare set).

In parallel with all the above I’ve made up some doubled sided photoetch masks to produce a set of detailing parts.

I’ve also pushed on with the Stromberg carburettor.

I’m currently working on the air filter for that carb. I was going to try casting it in pewter and made some mould masters for that, but I think the caps will be better made in brass and plated. The core is a 3D print with some plated brass mesh wrapped around.

I have now reached the stage where I am in grave danger of actually assembling something that looks like an engine.