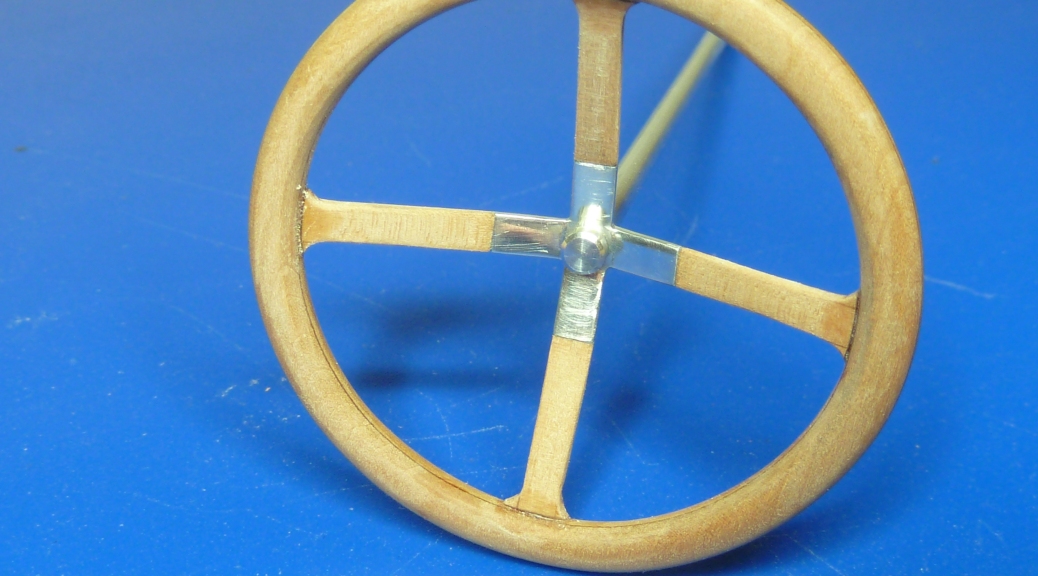 Next up was a new rudder and steering wheel, helm, tiller or whatever the proper nautical term is.

This was another scratch-build as the kit part was flawed anyway, having a significant inclusion on the front of the rim, which to be fair, wouldn’t have been hard to fill and paint over. It was however also a significant deviation from the real item, which was an unusual and attractive design.

The initial step was to bond three pieces of pear veneer with the grain of the centre layer at right angles to the others.

Then followed a lot of drilling, filing and sanding to get to…

The hub was made from aluminium sheet left over from the kit car I built.

And here’s the item after staining and varnishing, with the kit item alongside. The camera hasn’t picked out the delicate grain of the rim which is a pity.

Then came the rudder. The kit’s was a stainless steel item which was quite nice. It was also an unusual oval/spade shape whereas the pictures of Miss Severn indicate that it had a more rectangular zinc plated item.

The net result was that I ordered some ground steel rod to fit in the stuffing tube provided in the kit and made the rest from brass sheet.

The original in place. 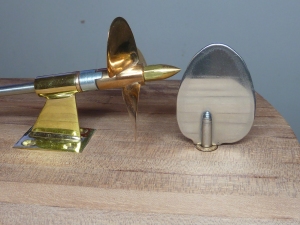 I’m currently working on a quick (the term is relative…) diversion back in the WW1 aviation field: a build of Hasegawa’s white metal 1:8 Clerget 9B engine. It’s a holiday from boats after a year or so of doing those, so quite welcome. Depending on progress that may well feature as my next post rather than the Chris Craft or Miss Severn.

The next post in this series can be found here: ‘Miss Severn’ 1922 Gold Cup Racer – Mack Models 1:8 (Part 7). If you are interested in the build of the engine being installed in this model, then that has a series of posts all of its own starting here: Hispano-Suiza 8F (Part 1)