With the basic fuselage structure complete it was time to start equipping it.

This was mainly a process of installing the subassemblies that I’d already completed such as the instrument panel, fuel tanks and such. However a number of smaller items did require building up first.

The control column and rudder bar were pretty straight forward. Or should’ve been. For some reason the varnish on the rudder bar refused to dry. It took a week sat on the top of a radiator before it was hard enough to handle. No idea what went wrong there.

The cockpit as presented in the kit is actually lacking in quite a bit of the fine detail. Not least is the fact that no fuel lines are provided. They were relatively easy to add though and there are plenty of reference pictures and diagrams on the net to work out what should be connected to what. I used lacquered soft copper wire of 0.75mm diameter to simulate the pipes.

I also modified the kit’s white metal casting of the throttle to amend the shape of it and add the linkage to the mixture control. Another addition was the inclusion of a small in-line fuel tap between the mixture control valve and the fuel pipe going forward to the engine. You can see all of these changes in the picture below.

The fuel tap was made out of brass pipe and rod hand filed to shape then polished up with emery paper and metal polish. The whole thing was then given a car wax coating as this delays oxidation for a surprisingly long time.

One significant change that I did make at this stage was to scrap the fuel gauge provided in the kit. To my mind it is simply oversize and impossible to fit in the correct location without it fouling the  plywood sides of the cockpit. Running realistic fuel lines to it is right out.

To overcome this I made a replacement about 90% of the size out of brass and glass. Sourcing the glass was particularly difficult. You can get the right size easy enough, but with minimum order quantities that meant I would have had enough to do 1000 of these models.

In the end I gave up and compromised on some tube that is slightly undersize, but I could actually get free. The installed gauge is shown below.

The original fuel guage provided in the kit is shown below, prior to it being dumped.

In parallel with the above I also installed the fuel tanks which is pretty straight forward (and necessary to complete the fuel pipe runs).

Don’t rely on these pictures for details on the fuel pipe runs though. In particular, the obvious one you can see above goes the wrong side of the frame vertical. It should be inboard not outboard and was corrected (aka scrapped and remade) after this shot was taken.

With the main cockpit done (excluding seat and lap strap) I moved on to fitting the ammunition boxes, chutes and castor oil tank. All of these have been truncated in height in the kit to accommodate an electric motor below. Once the model is fully built the subterfuge isn’t obvious so I built it as is, with the exception of painting the false platform they sit on black.

Having put the tanks in and equipped the front fuselage I then put the plywood coaming on. This wasn’t too hard. They are accurately cut by Hasegawa and provided you mock things up, take care and are fastidious about, fit they go on well. Be careful with any sanding. The top layer of the plywood is very thin and you’ll quickly be down to the second layer, which is a different colour.

As I was painting/varnishing my model I stained the panels with the same Antique Pine stain from Liberon’s that I used on the instrument panel, mainly because it was what I had, and the panel colours varied on the aircraft anyway. Having put yacht varnish on top, I think they have come out a little on the light side, but I’m reasonably happy with them. They form a really nice visual part of the model. 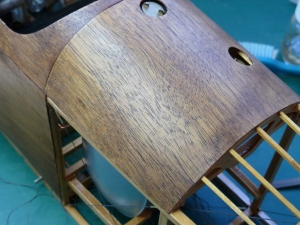 Eagle eyed viewers will also note that I’d done the rigging of the fuselage by this point too. This was done in the same manner as mentioned earlier during the assembly of the wings. One point to note is that the model includes all the external surface rigging, but omits the internal crosswise bracing for some reason. It’s not hard to add and I had sufficient spare brass lugs provided with the kit to accommodate it. The photograph below clearly shows what I mean.

The final bit of fun at the front end of the fuselage was the installation of the Lewis machine guns. They are a VERY tight fit and I had to be fairly brutal to wriggle them into position. I also had to locally file back the aluminium panels around then to allow the to sit in the correct manner. Not the easiest part of the the build so far. 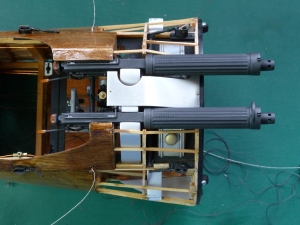 Apart from adding carburettor intakes and the remaining Al panels that was pretty much it for the forward fueslage.

Next the completion of the fueslage which involved a mini disaster as a result of trying to be too clever.