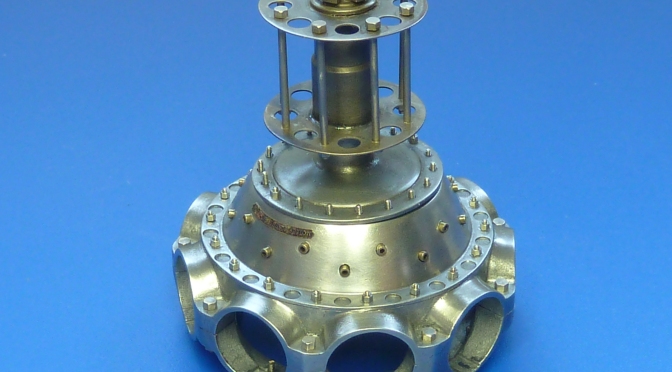 Having completed the stand and ancillaries for the model, the next section is about building the main affair: the engine proper.

The key thing with this kit is that all of the main components are white metal castings rather than the usual plastic. This calls for some new skills if you are a plastic modeller, but there is a lot of crossover too.

The castings themselves are quite good, but very soft. 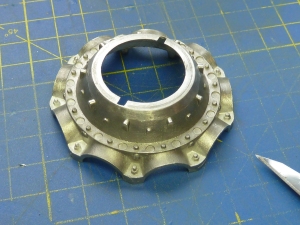 They come with all of the bolt heads cast in place as per the injection moulded kit. These were the first items I intended to replace. No matter how good the casting the moulded bolt heads never look quite as sharp as the real thing.

On this model I’ve used tin plated brass nuts and bolts from Prime Miniatures. I did investigate using stainless steel items but they are hard to get, and when I did find them they were expensive. There are quite a few bolts (and studs) to replace and the cost of them rapidly mounts up, even using tin plated brass. I’ve used M0.6 and 0.8 for the bolts on the inlet tubes, M1.0 everywhere else with the exception of the main bolts holding the crankcase halves together, which are M1.2. The ones in the propeller boss are also modified M1.2.

Then commenced the removal of all the cast in bolt and studs followed by drilling out to accept the replacements. I also started to clean up the castings as I went along.

Once the main joins on the crankcase had been sorted so that everything went together peoperly I moved on to removing the cast in ignition lines on the rear of the engine. They would be replaced with stainless steel wire.

To enable the stainless ignition wires to be fitted I drilled out the mounting studs 0.3mm in preparation.  While doing this I noticed one of them was missing,  so I installed a brass replacement. The studs will be painted gloss black anyway, so it won’t show. I initially thought I must’ve broken the original off at some point, which was a bit alarming, but early pictures I’d taken of the part show that it was never there at all. Either it had been broken before or had failed to cast properly.

The studs are actually an anomaly in the kit anyway. On the real engines the wires go direct to the entry points in the crankcase, but can’t on the kit as they foul the engine mounting plate in the injection moulded model.

The next thing was to trial fit the cylinders and inlet pipes. The cylinders themselves all seemed to be rotated a few degrees out of true if I relied on the locating slot cast in them. So I removed that and will rely on the Mk.1 eyeball for alignment when I finally come to fit them.

The inlet pipes also seemed overly long so I cut them down slightly, as shown below.

I also shaved off a little of the metal on the rear mounting point of the crankcase.

All the mods did mean I ended up with matched sets of cylinders, crankcase positions and inlet tubes, which complicated things a little for the future, but part marking and numbering have so far kept things on order.

Having made sure all the major components fitted together properly I could get on with improving the finish of the castings.

I deliberately haven’t gone for a perfect result. I want the engine to look as if it has seen a bit of service and lived a little, so roughed out with 500 grit wet and dry paper and finished with very worn 2000 grit paper.

The bosses for the mounting points of the push rods make polishing the nose of the crankcase a real pain. They weren’t moulded in either. They were actually brass tubes. So I breathed deeply and decided to file them all off and replace them with brass tube after I’d polished the surface.

If you follow this route make sure you drill the holes before you remove the cast in bosses. They give you a nice perpendicular surface to drill into as well as saving the hassle of marking where the holes need to be.

With the inclusion of all the replacement bolts and studs the polished crankcase started to look a bit more impressive. 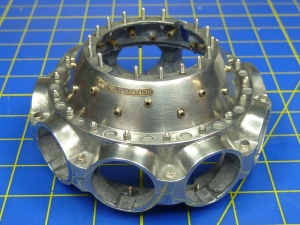 Some of you might have noticed that a nameplate has appeared on the crankcase in the above picture.  The kit doesn’t actually include one, but the real engines had one, and it helps to add a bit of interest, so I made one by etching some thin brass sheet.

The Clerget engine was basically steel, but I’ve noticed on a number of museum examples that the nose section seems to age differently to the rest. Maybe it’s a slightly different grade or doesn’t get so coated in castor oil. Whatever I wanted to try and replicate the effect to add interest to the model, rather than having a uniform finish throughout.

The nose piece was polished up as normal, then dropped in some highly diluted burnishing fluid. It was swilled around in the solution until I got the effect I wanted. A small word of warning here. The reaction seems to persist slightly, even after you’ve washed the fluid off. So you need to halt it slightly before it’s reached the state you want.

A similar process was applied to the gears at the rear of the engine. The darkening was allowed to progress slightly further though.

Ageing of the cylinders came next. Some of them had quite substantial dents in them out of the box, and it took quite a while to get them all straightened out. Polishing out casting lines also required quite a lot of effort. I ended up using a very blunt extra-fine razor saw to clean the bases of fins.

The cylinders were then aged.

Once treated the outer edges of the fins and the base were repolished to give a contrast to the rest. 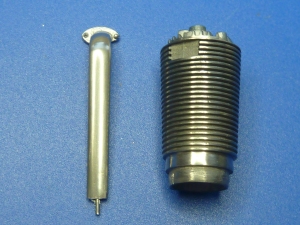 One other part I wanted improve was the propeller hub at the front. My main dislike was that it had no propeller mounting bolts with it, and I haven’t seen one without them.

A quick measure of the holes in the flanges indicated that they were significantly oversize. The flanges were also a little thick, but not by much. The upshot was that I decided to make my own flanges out of brass sheet.

Once completed they were soldered to the nice turned brass hub provided in the kit, plated and aged.

The finished hub with unaged hub bolts to give some contrast.

The main engine crankcase components as they are at the moment. They were originally finished with a satin lacquer to stop future oxidation, but that made them look too flat. So I spent a happy afternoon removing it and used Renaissance Wax instead. The results with that were much better. 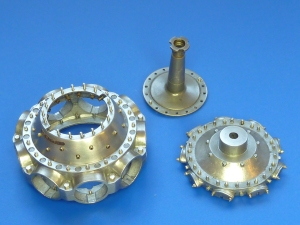 The next post should be the last on the engine all being well. Cylinders, rocker arms and pushrods will all be receiving detailing attention.