Having successfully dodged the main event in this model I’d reached the stage where I had to get going with the fuselage. I don’t know why I’d been putting it off, but I had.

I dithered over whether to stain the fuselage parts before the build, or do the whole assembly afterwards. As a lot of subcomponents had to be fitted before it was completed, and so would need masking off for spraying, I decided to stain all the wood first.

Once that was complete the first step in assembling the fuselage was to bend the longerons into the correct shape. The kit comes with some handy formers to allow you to do this. The instructions tell you to make minor cuts on the insides of the curves before dampening the wood and putting it in the former to dry and take a set shape.

I didn’t want to make the cuts as they’d be very visible and weren’t on the real aircraft, so I just went with dampening the wood prior to bending and omitted the saw cuts. In fact I put the pieces in near boiling water for a few minutes and found they bent to shape easily.

These were then pinned in place on the plans and the rest of the structure built up around them .  When each side was complete a further bending operation was required to curve the side structure in the vertical plane. Both aft of the cockpit area and at the tail. The tail section is shown below to give you and idea of the finished shape achieved. 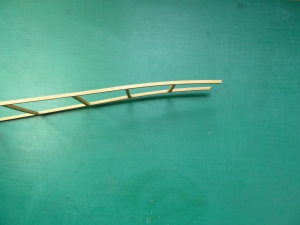 At the end of the stage I was left with matching fuselage halves looking like this.

The kit also provides you with a couple of jigs to allow the fuselage sides to be joined together. One ensures the cockpit area is square and correctly spaced apart while a second ensures the tail section joins at the correct angle and is symmetrical. As an added bonus the latter also extends vertically so that the model sits correctly on the table with the longitudinal datum horizontal. The jigs are extremely useful and a nice addition to the build process.

Once the two halves of the fuselage were joined I moved on to start equipping the cockpit area as per the build instructions.

One alteration that I did make early on was to add the magnetos and oil pump behind the engine. As I mentioned at the start, the lady who sold me this model also included a full Le Clerget engine kit. This had the magnetos and oil pump parts, and it was a relatively simple task to adapt them to fit. A few shots of them in situ are shown below. They’ll barely be visible on the finished model, but you should just be able to see them. For those interested they were airbrushed with Humbrol’s Metalcote Steel and, once dried, buffed to the final finish. Some pipework detailing was added using lacquered copper wire. 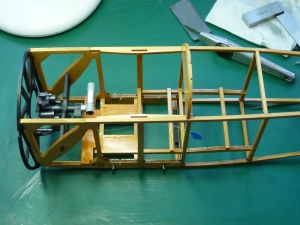 This left the model ready for the full assault on the cockpit area.