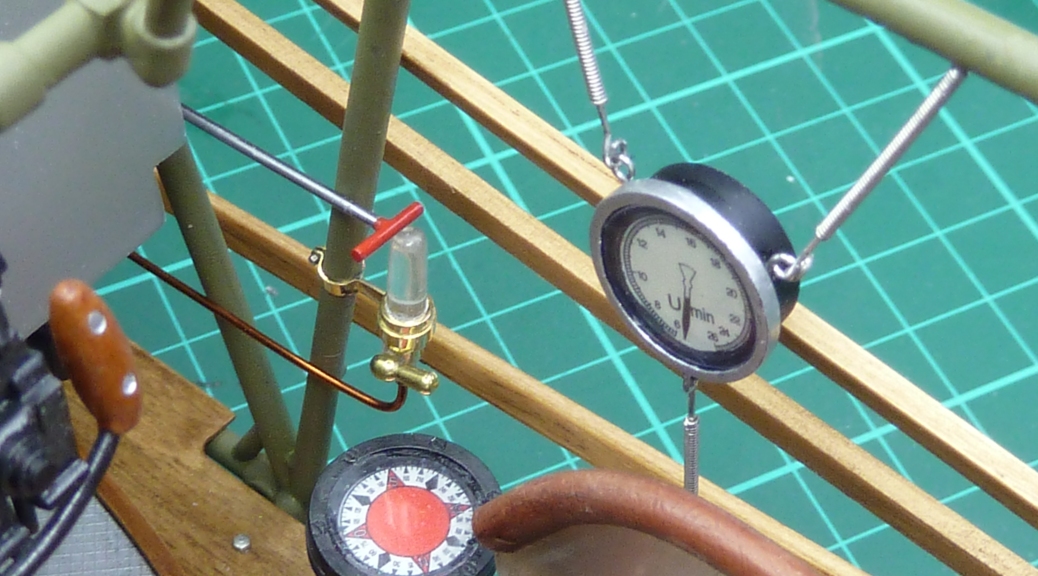 Well, it’s been a few weeks since the last post on here, but things have been happening at MBIQ Mansions.

I’ve been through another bit of a rough patch and the other half was made redundant and sent on gardening leave while she worked her notice. I never get much modelling done when she’s here as it seems rude to turn my back on her at the modelling table

However, normality resumes: Gardening Leave over, new job started and I’m back working on the Fokker.

A number of small details have been added to complete the detailing of the cockpit, mostly on the port side.

Hasegawa provide you with quite a nice fuel cock lever and mixture control as a white metal casting, but it doesn’t connect to anything. However it didn’t take much to drill out the casting and add some stainless steel rods to simulate the linkages to the valves mounted underneath the fuel tank. I added some stainless steel nuts too to give it some extra detail. 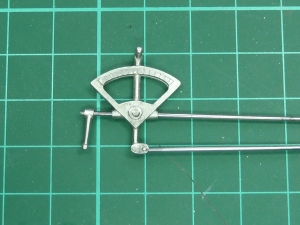 The arrangement of the fuel tank in the Hasegawa kit doesn’t match any of the photos I’ve seen of the real thing. The kit version appears to assume the fuel feed comes from a collector in the centre of the tank, whereas the pictures I’ve seen show it coming from the port rear. As the latter fits with the positioning of the fuel controls I went with that. As I’d already installed the tank at this stage it was a little late to change it, but the discrepancy is symptomatic of the anomalies I’m finding in this kit. 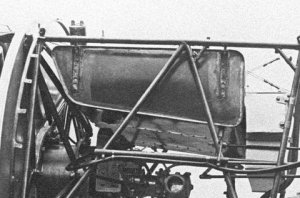 The real installation is shown above, while the kit tank can be seen in a picture further down in this post. The horizontal wiring in the above picture is the magneto switch connections I believe.

The fuel cock and mixture control assembly was painted a brass colour and the control rods left in their natural metal. To simulate the valves under the tank I fashioned a faux valve assembly out of some brass rod and some 1mm stainless steel nuts. I’m not certain where the fuel feed from the valves actually entered the carburetor so I made and intelligent guess based on the aircraft picture above. 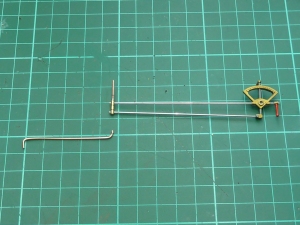 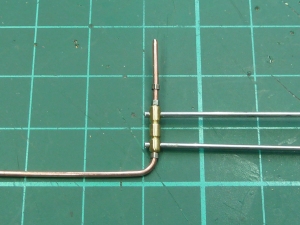 And installed in the kit. 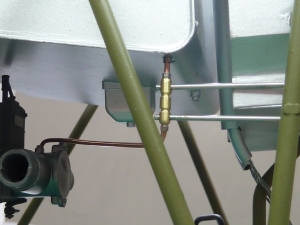 And installed in the cockpit. Subsequent to the picture I have repainted the wooden handle on the mixture control as it got damaged while I was handling it. 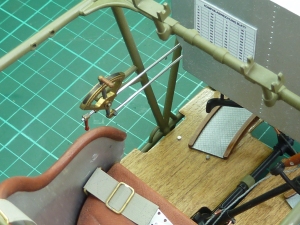 The bottom rod controlled the mixture strength while the top one functioned as a simple on/off valve. Incidentally, once you install this arrangement in the kit, the reason for the cutouts in the ammunition bins becomes obvious. The actual throttle for the engine was mounted on the control column.

The other item installed on the port side of the cockpit was the magneto switch. Curiously Hasegawa provide you with a ‘temperature gauge’ to go in the same location and it’s a similar shape. However, all the references I’ve seen say the magneto switch was there. The white metal casting provided in the kit does make a good basis for converting to the magneto assembly though. 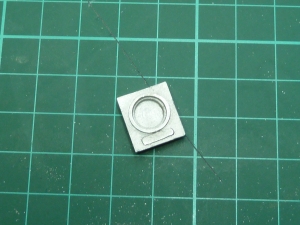 File off the edges, reverse it and attach it to some 0.75mm plywood. Then add a few details from brass rod and sheet… 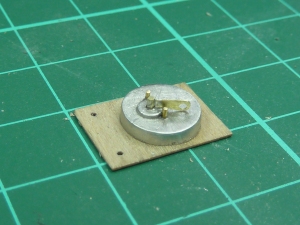 and there you have it.

The item was painted a brass colour and some 1mm bolts added to mount it to the cockpit rail. 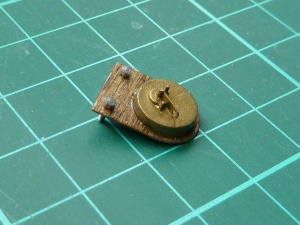 Here’s a picture of it installed in the cockpit above the fuel controls. 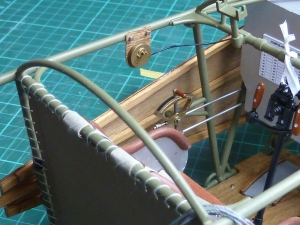 The final item added in the cockpit was a mysterious T shaped control that I haven’t been able to find the function of. I’ve seen it in various period photographs though like the one below. 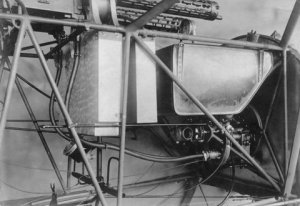 I’m referring to the horizontal bar half way down the starboard fuselage side. Note, this is actually a picture of a Fokker Eindecker V installation, but this was very similar to the Dreidecker. (literally 3 wing, or triplane, hence Dr.1).

The control was made from stainless steel rod with a soldered T piece on the end, making use of my new skills in soldering stainless. I haven’t a clue what the thing connects to at the forward end, but that is not visible in the finished model anyway. The final installation looked like this… 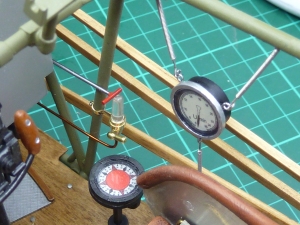 This picture also shows the compass installed. This was made as per the kit, though the actual dial markings are wrong. The red disk in the centre should be brass coloured and the primary compass ordinate arrows were red, blue and yellow. I considered making my own decal, but it would require heavy use of CAD which I’m not up to at the moment. Also the number of inaccuracies in this kit is beginning to wear me down and I’m losing heart and enthusiasm if I’m honest.

Apart from the installation of the guns that pretty well completed the cockpit internals. Since starting to install the plywood sides to the fuselage I’ve discovered that some Dr.1s had the rev counter mounted between the pilot’s shins (see the Fokker Eindecker picture above). However, at this late stage I’d have to rip a considerable amount of the kit apart to get one in position. I might have a look to see if I can fit one without disrupting things too much, but if I can’t I’ll leave things as is, though I’m not really happy with it not being there.

I also installed the ammunition bins permanently as,  up to this point they had only been dry fixed. I’d hesitated to fix them permanently as I’d discovered why Hasegawa had omitted the forward one. As designed, the aileron control lines go through the same space!

I haven’t been able to find out exactly how the wires were routed on the real aircraft, though one book does suggest that they emerged from guide tubes between the ammunition bins. However that isn’t possible on this kit without remaking the aluminium fuselage decking under the guns. That’s a fairly complex double curvature thing which I don’t feel up to tackling (it was actually a fabrication of several single curvature sheets on the real aircraft), so I decided to add my own guide tubes for the control lines that had them emerging in the right location for the kit’s design.

That entailed bringing them around the front of the ammunition bins, which is definitely not how they went on the aircraft. However the deviation is pretty well hidden and hopefully not that noticeable. 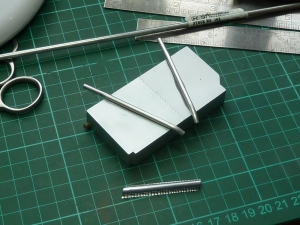 The above picture shows the guide tubes fitted to the front of the forward ammunition box. In an attempt to make them look aircrafty I added some covers to hide the fact they were simply glued in place. The whole arrangement is entirely fictitious though. 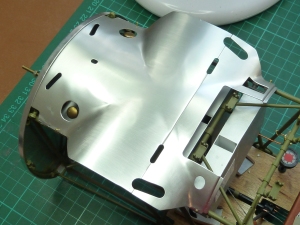 The photo above shows the aluminium sheeting beneath the guns. The control lines emerge from the slots parallel to, and bisected by, the panel join line.

While I’m here, a quick word on the panel join line. On the kits I’ve seen built this is often quite poor and having tried to assemble it as per the Hasegawa instructions I can see why. I opted to pioneer my own method to get a better fit.

First I removed the various overlap tabs provided by Hasegawa and turned the interface into a simple butt joint. Then I used some aluminium tape on the underside to hold the butt joint together. It makes a strong joint and allows the two halves to mate neatly. 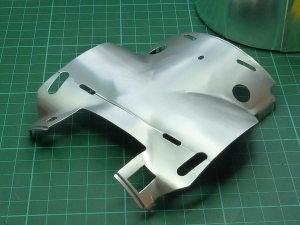 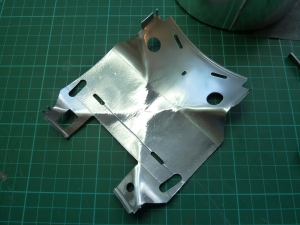 That completes the cockpit stuff as far as I’m concerned.

I had previously said I’d post about problems with the tailplane, but that saga is on ice at the moment pending the arrival of additional supplies from the US, so the next post will probably be about the wings which I’m building in parallel.

I need some instant success on this model to get the enthusiasm levels back up!